This is a quote from a First Grade teacher who transferred from a Charter School to a Public School after just one year of teaching:
“The kids in my Charter School First Grade class were never allowed to be children. Instead they were stuffed into little invisible straight-jackets all day long, from which outbursts and tantrums were frequent.... I am now teaching at a public school where my First Graders have play center time and lots of choice; our curriculum isn’t scripted, the children are allowed to talk, sing, breathe, and be themselves. It’s truly a different world, one my former students will most likely never know.”

Obviously, dumping the kids that need the most help does not result in the education of ALL children. But the purpose of charter schools has never been about helping children. The real purpose of the charter school weapon of mass deception is the same as the purpose of high stakes fake tests and Common Core fake standards – to privatize public schools and transfer billions of dollars from the tax payers into the pockets of greedy billionaires.

Three Weapons of Mass Deception are Designed to Work Together to Privatize Schools
As we described in earlier chapters, first billionaires impose are inappropriate Common Core standards and confusing Common Core curriculum. Then they force kids to take high stakes high failure rate tests – unfair tests that two out of three kids are certain to fail. Then when the kids fail the fake tests, the billionaires move in to close the “failing” public schools and replace them with privately run but publicly funded for-profit charter schools – schools controlled by the billionaires. This clever deception is designed to gradually phase out public schools like a block of ice that slowly melts away.

Charter schools then create huge profits for the billionaires by firing experienced and certified teachers and replacing them with untrained and uncertified and poorly paid “staff.” Second, charters weed out any struggling and special needs students to allow them to dramatically increase class sizes. The profits then go to out of State “administrators” who are accountable to stock holders rather than to the parents of students. Some of the profit is diverted into huge bribes for the re-election campaigns of corrupt politicians who promote charter schools. This is the corporate model of education reform. 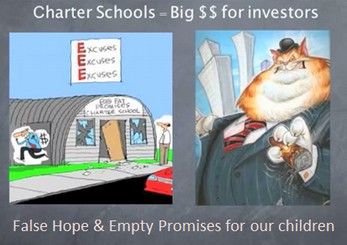 This is why billionaires have spent billions of dollars trying to convert every public school in America into private for profit charter schools. This is ironic because the main reason our children are forced to attend some of the lowest funded most overcrowded schools in the nation is that billionaires are not paying their fair share of State taxes. 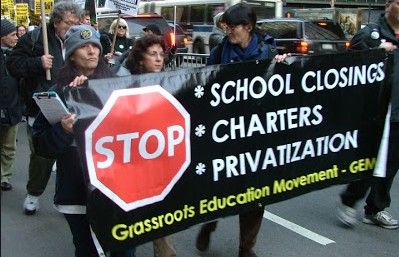 #1 Charter Schools are NOT Public Schools... Public Schools are Child Centered... Charter Schools are Profit Centered
Charters are publicly funded, but privately operated schools. Because they are privately operated schools, charter schools are not accountable to the public or to a publicly elected school board. Instead, they are run by a small group of unelected corporate managers who sub-contract to private for profit corporations. Put more bluntly, charter schools are a corporate takeover of our public schools. The billionaire bought mass media propaganda has falsely claimed that billionaire run charter schools are just like public schools only with more “flexibility.” What they fail to mention is that “flexibility” means not accepting all children, not using trained teachers, not having available administrators for parents to talk with and not having elected volunteer school board members who oversee the budget and who parents can talk with to get their concerns addressed.

Here is the structure of our public schools – a transparent structure with many checks and balances which has fostered public schools for more than one hundred years. The best education is made democratically, in the local community by parents and teachers with the oversight of a publicly elected school board – all working together to meet the needs of their children. 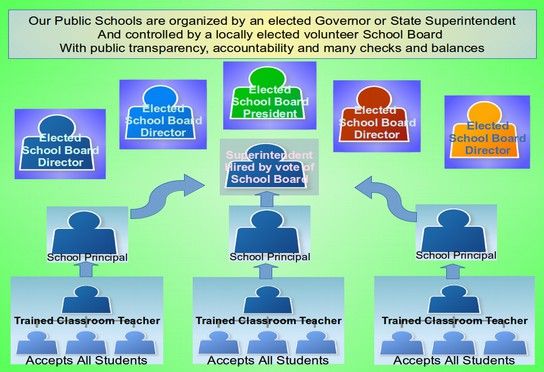 Here is the structure of billionaire run charter schools with no checks and balances – leading to rampant fraud and corruption: 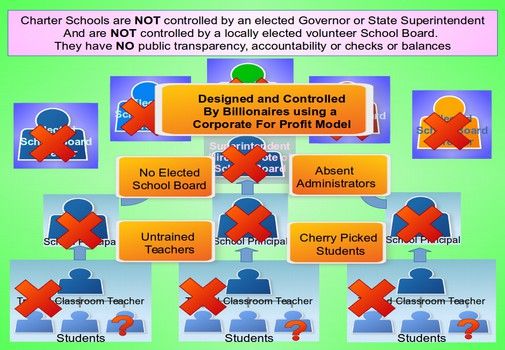 #2 Charters Harm Children by Robbing Public Schools of Public Funds
Charter schools siphon off money from public schools. The whole point of charter schools is to use tax payer money to increase corporate profits. Diverting funds away from our public schools makes our school funding situation even worse! 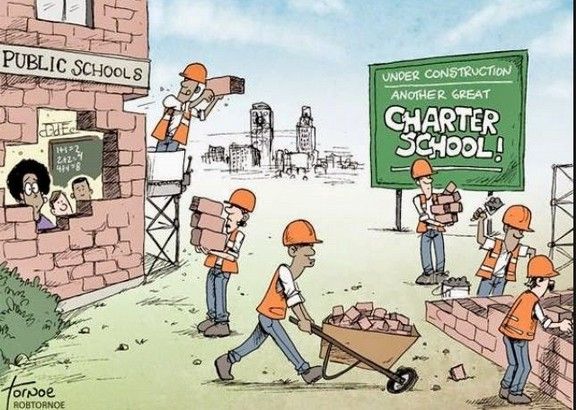 #3 Charter Schools are NOT Non-profits. Instead the need to make a profit makes them much more expensive than comparable public schools.
Charter school con artists mislead the public into thinking that charter schools will be run by a non-profit. However, the non-profit typically sub-contracts the operation of the school to a private, for-profit corporation. 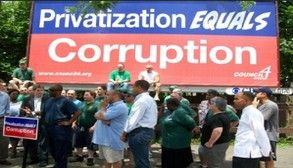 #4 Charter Schools are Fraud Factories
There are several reasons that privatization of public schools has led to rampant fraud and outright theft of tax payer dollars. The first is the profit motive. Billionaires cannot help themselves. They are used to taking whatever money they can get their hands on. Second, charter schools are a toxic mix of deregulation combined with lack of accountability. Since there is no elected school board to watch over how public funds are spent, charter school operators are free to divert public funds to themselves and their friends. Even when the fraud is uncovered, there is no elected school board to kick out of office and replace with a better group. Parents have literally no voice once their school has been replaced by the fraudsters. The third problem is that charter schools like to measure how they are doing simply by high stakes test scores. This inevitably leads to cheating scandals and many other attempts to manipulate the system – such as having low performing students call in “sick” and not take the test – and even handing students the answer sheet before the test or having administrators change students test answers in the dead of night. There are many websites that have documented thousands of cases of fraud and abuse at charter schools. The fraud is so rampant that we have compiled a few of these stories into a separate article to give you an idea of what a bad idea it is to deregulate public schools and hand them over to for profit corporations.

#5 Charter Schools Cherry Pick the Easiest Students to Teach
Because charter schools are interested in maximizing their profit margins, they frequently weed out students who are more expensive to teach. This includes slower learners, children with special needs, children in rural communities and children from poor or unstable families. Our public schools accept all children and help every one of them succeed. 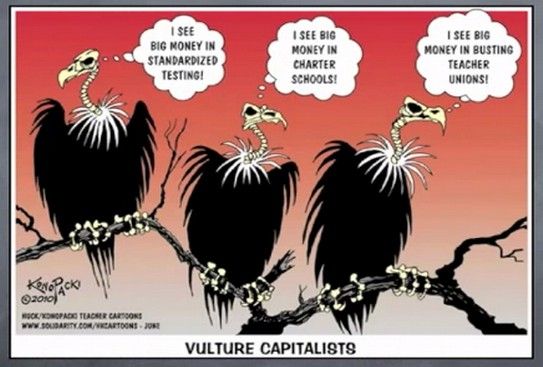 #6 Charter Schools often use poorly trained, inexperienced teachers
Real public school teachers are required to have at least5 years of real training in education and child development. However, charter schools often save money and increase their profit margins by hiring “Teach for America” recruits who are given as little as 5 weeks of training. Many of these fake teachers quit in their first year of teaching. The results are predictable. Children fail to learn, there is chaos in the classroom and the unprepared teachers resign within their first year – leaving students and parents to pick up the pieces of a lost school year. 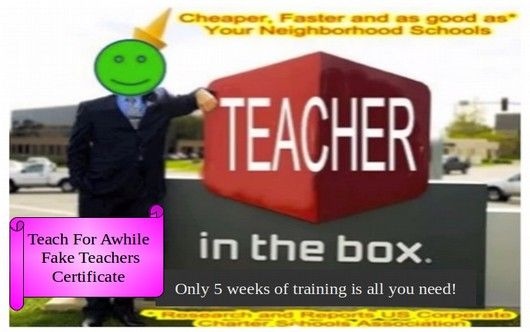 There is a huge turn over of teachers at charter schools.
Here is a quote from one teacher who spent a year in a charter school:
“Unlike most public schools, charter schools do not offer contracts, tenure, or a union. Teachers sign “letters of intent”, stating that they intend to work in a position for the school year, that they can be fired at any time without cause, and that they are free to leave at any time. Staff changes are frequent. At my school, since teachers were more or less viewed as factory drones, replacing them was swift and emotionless--when people quit, it was often not even mentioned at the weekly faculty meeting. A face was absent, a new face was in place, and life continued. During that one year, seven teachers quit between September and May, one was fired, and five more (myself included) resigned in June.”
https://maryannreilly.blogspot.com/2011/04/guest-blog-miss-c-recounts-teaching-at.html

#7 Charter Schools do NOT perform better – and often perform much worse than public schools Study after study has confirmed that privatizing schools does not improve student outcomes – despite cherry picking children and booting out kids with problems. For example, the National Center for Education Statistics found that charter-school students performed significantly worse on academic assessments than their peers in traditional public schools. This is why the charter school movement is not about making schools better. It is simply about robbing public schools and diverting billions of dollars to private for profit corporations.

#8 Public Schools already offer many Flexible Reform Options
This debate is not about improving schools. Like all parents and teachers, I am in favor of improving schools using credible scientifically proven reform strategies. Our current State laws already allow innovative schools, alternative schools, cooperative schools, home schooling, Hi Tech schools, Multicultural schools, Flexible Curriculum reforms, Testing waivers, Parent Choice options, College Running Start opportunities, GED options and practically any other changes or experiments that a local school board wants to try. Nearly every school district in East King County has several different kinds of successful alternative and experimental schools and instructional programs to meet the needs of students and parents. The key is that all of these programs have public accountability to a publicly elected school board. 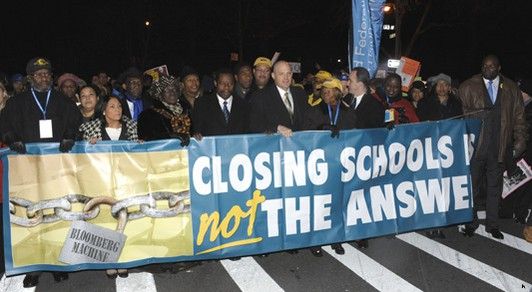 #10 We need REAL school reform based on credible scientific research.
Public schools are the foundation of our Democracy and the foundation of our economy. Public schools offer equal access and opportunity for all of our children. Two decades of research and experience with charter schools has confirmed that charter schools are not the answer to improving our schools. We should not gamble with the future of our children just to increase corporate profits. What we need is REAL school reform based on credible scientific research. This includes improving school funding and lowering class sizes. 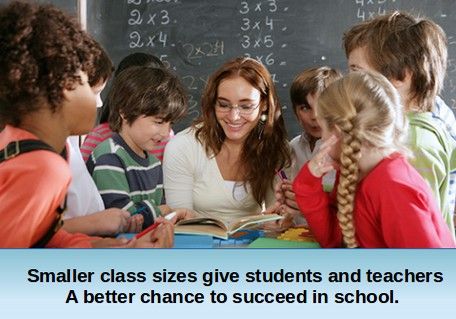 We also need stronger efforts to increase retaining good teachers and reducing bullying in and out of the classroom. Mostly, what will help children is reducing POVERTY. The best way to improve test scores is to make sure that the parents of every child have a good job. Sadly, the promoters of charter schools are the very people who are blocking funding our public schools and blocking the kinds of reform that would actually benefit ALL of our children.

Look Who is Backing Charter Schools
Despite all of these drawbacks, Billionaire Bill is backing charter schools with $5.5 million courtesy of US tax payer write-offs through his fake Gates Foundation.

What is next?
Now that we have a basic idea of how charter schools harm children, in the next section, we will look at the history of how the charter school scam started – beginning in Chicago in the 1990s.