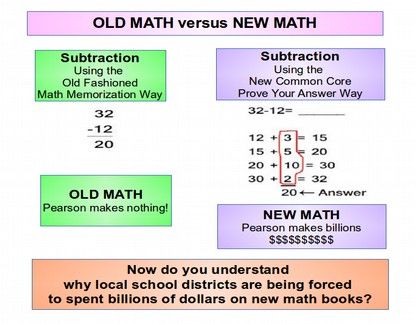 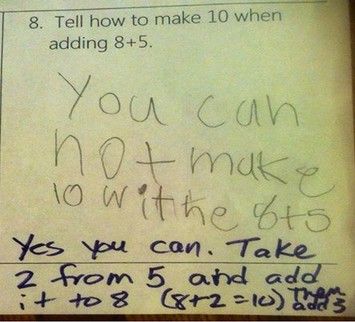 More is Less... Subtracting by Adding
Another confusing part of Common Core Math is that to subtract you need to add and to add you need to subtract. Here is an example. 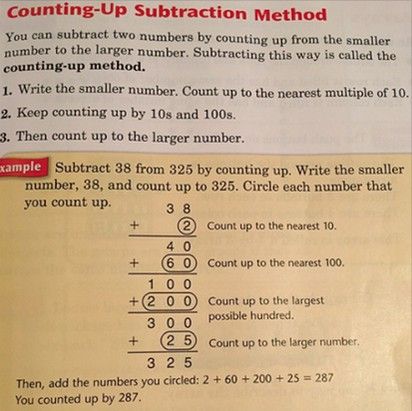 George Orwell warned us that “New Think” would involve convincing us that war is peace and bad is good. With Common Core New Think, now to subtract, we must add and to add we must subtract. Welcome to the insane world of Common Core math!

Set theory is not merely limited to real world examples. This is what makes set theory so useful for computer programming. The problem is that set theory is extremely abstract and well beyond the brains of most young children to understand. Remember that young children are “concrete thinkers.” The old style of teaching math is based on concrete thinking and concrete reasoning. Even many adults (parents) are not able to understand the new type of abstract math. It is not merely children who are forced to start crying when confronted with this new form of math, it is also their parents. This new math is not supported by any child development research. Instead, it is largely the produce of one person, David Coleman's friend and college buddy, Jason Zimba, the person with Student Achievement Partners who wrote the insane Common Core math standards.

Common Core also uses confusing word problems and puzzles which are confusing even for math experts to solve. 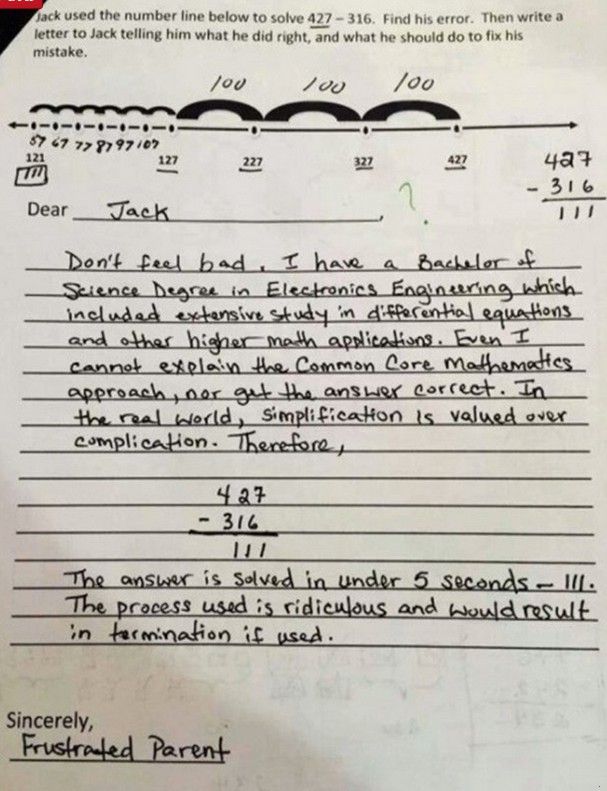 Common Core Math Shortcomings run all the way through 12th Grade
Setting aside the problems with Common Core assignments and Common Core tests, the problems with the Common Core standards are not merely limited to Kindergarten and the First Grade. According to the detailed comparison study in Washington State, in the Second Grade, Common Core standards fail to address days, weeks, months and years when calculating time. Instead Common Core only covers hours and minutes. In the Third Grade, Common Core fails to cover the relationship between multiplication and repeated addition and/or the relationship between division and repeated subtraction. Common Core also fails to cover the concept of equality. (can it be billionaires don't want kids to know about the concept of equality?).
https://web.archive.org/web/20111124022641/https://k12.wa.us/Corestandards/pubdocs/WAAlignmentDocumentmathematics.pdf

In the Seventh grade, Common Core includes histograms, line plots and box plots – but not stem and leaf or circle graphs. (See page 50). Ironically, circle graphs are on the Common Core test. Perhaps including items on the test that are not part of the standard curriculum is intended to keep the kids on their toes and get them used to being judged on things they were never taught.

This is a major mistake because Euclidean Geometry is much easier for kids to grasp (because it relates better to the real world) that Cartesian Geometry. Cartesian geometry may better relate to computer programming - but it is more abstract than Euclidean geometry. There are many critiques of the Common Core Geometry standards posted on the Internet written by Geometry instructors which explain the need for Euclidean Geometry and make it clear that Common Core does a bad job with Geometry.

He found that the SBAC test math questions did not comply with and in many cases completely contradicted the Common Core math standards. Even worse, with some questions, it was impossible to provide the correct answer while in other cases incorrect answers were accepted as being correct! Here is a quote from his report:

“No tests that are so unfair should be given to anyone. Certainly, with stakes so high for students and their teachers, these Smarter Balanced tests should not be administered. The boycotts of these tests by parents and some school districts are justified. In fact, responsible government bodies should withdraw the tests from use before they do damage.”

You you still think there is nothing evil about Common Core and the SBAC test, we urge you to read and download Steven's shocking report. Steven wondered how a test that was funded with over one hundred million dollars in tax payer funds – one of the most expensive tests ever created – could have been constructed in such a deeply flawed manner. Certainly, if the goal of SBAC is to actually promote the Common Core standards, it is a complete failure. However, if the goal is to create mass confusion and chaos among teachers and students – resulting in flunking as many students as possible, then the fatal flaws in the SBAC test make more sense. While Steven attributed the flaws of the SBAC test to reckless incompetence, we have a different theory. We think that the flaws in the SBAC test were deliberately included as a feature – part of the “designed to fail” nature of the test. It is simply not possible to teach students how to pass a test where the wrong answer is the right answer and the right answer is the wrong answer!

Thus, the marketing hype around Common Core that it “raises the bar” or “is more rigorous” than prior State standards is simply not true. Those who have supported Common Core under the false belief that it would “raise the bar” and thereby motivate students to achieve higher standards should rethink their support of Common Core. Common Core does not raise the bar.

Instead, it is merely an excuse to artificially lower student test scores. We advocate a return to the higher standards that preceded Common Core. Our students deserve fair standards that were created by educators and child development specialists – not incomplete and sloppily written standards that were written by billionaires and Wall Street Hedge Fund Managers intent on destroying schools and increasing corporate profits.

Specific Concerns about the Common Core Math Curriculum
In addition to the general concerns that Common Core is not needed, harms students and takes control of curriculum and testing away from teachers and local school districts, there are many specific concerns that upset parents and teachers. We will only look at four of them here.

Second, Common Core new math techniquesare not backed by any scientific research. This is in part because Common Core was adopted so quickly that there was no time to do research before Common Core was implemented. But the lack of research was also likely due to the fact that the developers of Common Core KNOW it will not work. The last thing they want is research. 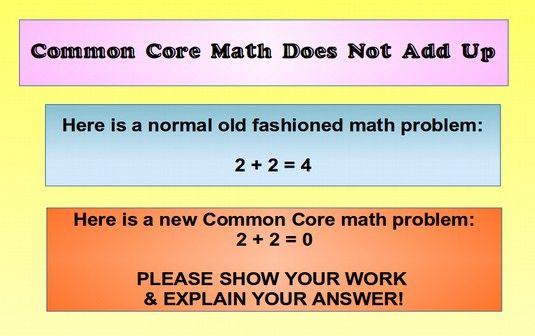 Those familiar with set theory understand that sets of numbers can have any result depending on how the properties of the set are defined. Just like with the rest of the Common Core standards, one is not limited to reality. Also, when billionaires calculate their taxes, no matter how much they make, the amount of taxes they pay is always zero. All they need is a fake non-profit like the Gates Foundation to set up a tax evasion and money laundering scheme. This is why it is so important to teach kids new math – so they will better understand how our modern tax code works.

While Cartesian Geometry does lend itself better to computer learning on a two dimensional (X, Y axis) grid, the real reason for this change is to make geometry harder to learn. Just as the change away from addition and multiplication tables is to make basic math harder to learn. The underlying goal is that Common Core has been “designed to fail.” 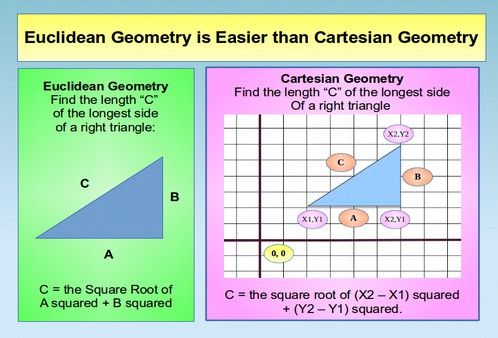 In other words, the goal is not to improve math instruction. It is to destroy math instruction and therefore increase the chances that students will fail standardized tests. The real plan is that increasing the failure rate in public schools will increase public acceptance for a private for profit takeover of the public schools.

Fourth, Common Core does not include any Precalculus standards. Massachusetts was forced to discard their Precalculus standards in order to adopt the much weaker Common Core standards. The problem here is that with a Common Core “teach to the test” mentality, it is less likely that Precalculus will be offered in high schools in the future meaning that students will not be ready to take Calculus during their first year of college. Because Calculus is required to start engineering programs, colleges are pretty upset about Common Core “dumbing down” their Engineering programs.

“It is astonishing that Massachusetts adopted Common Core's standards without asking the engineering, science, and mathematics faculty at its own higher-education institutions (and the mathematics teachers in its own high schools) to analyze Common Core's definition of college readiness and make public their recommendations. After all, who could be better judges of what students need for a science, technology, engineering and math major? Massachusetts should revise or abandon its Common Core's mathematics standards as soon as possible.” Dr. Sandra Stotsky was a member of Common Core's Validation Committee from 2009-10. She is professor emerita at the University of Arkansas.


University of Washington instructor, Cliff Mass, wrote the following about the Common Core Math Standards: “Are the new Common Core standards better than the current ones enjoyed in our state? The answer is a clearly no. Areview by the state math watchdog group, wheresthemath.com, has documented a number of problems with Common Core compared to our current standards. Common Core standards are extraordinarily difficult to read and decipher, a critical requirement for any standard. It is will be very difficult for most teachers to understand what they need to be teaching--which is a huge problem. Want an example? Here is an example of a fifth grade Common Core standard:
Interpret the product (a/b) × q as a parts of a partition of q into b equal parts; as the result of a sequence of operations a × q ÷ b. For example, use a visual fraction model to show (2/3) × 4 = 8/3, & create a story context for this equation. Do the same with (2/3) × (4/5) = 8/15. (In general, (a/b) × (c/d) = ac/bd.)

There have been no pilots or tests of these new Common Core standards. No proof that they enhance student performance. Can you imagine pushing a new national math standard without insuring that students learn better with them?
Common Core Math Standards: Worse for Our Kids and Millions of Dollars Wasted
https://cliffmass.blogspot.com/2011/01/common-core-math-standards-worse-for.html

What is next?
Now that we better understand the drawbacks of the Common Core math standards and curriculum, in the next section, we will look at the decline in popularity of Common Core standards, curriculum and tests as more parents and teachers have become aware of the shocking nature of this war against our children.